Onoore (called onore in some areas) refers to Betula schmidtii, a variety of tree that belongs to the birch family (Betulaceae). It is likely that the Japanese name derives from its extreme hardness that can even break an axe (ono).
As the wood is hard and less likely to wear out and rot, it has been used for making sleds designed to transport heavy timber and luggage, and also as an alternative to the anvil. The anvil is an iron platform used by blacksmiths to hammer out red-hot steel. Onoore is so hard and heavy that it can be used in the place of iron. In addition, the wood is believed to have a strong heating power if used as charcoal. 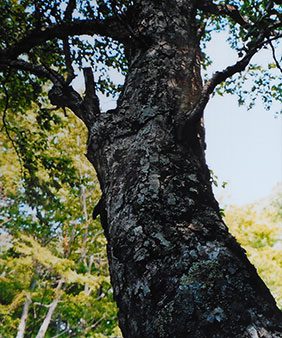